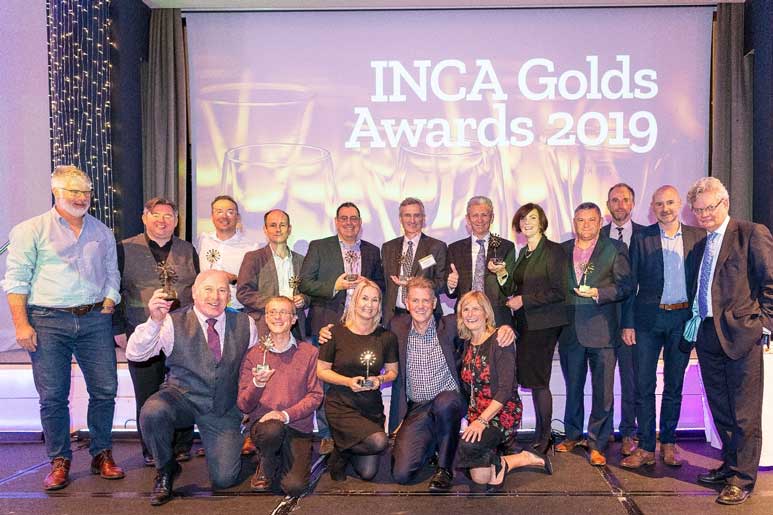 Highlighting the most innovative digital infrastructure developments in the UK

Following the success of INCA’s inaugural awards last year, which saw sector heavyweights such as Hyperoptic and KCOM gather together to celebrate the UK’s independent network builders, the 2019 awards have once again invited submissions from network builders, operators and other independents working hard to improve the UK’s digital infrastructure.

The achievements of some of the UK’s best independent network organisations and individuals were acknowledged last night at our second annual INCA Golds Awards Dinner.

As the Government pledges to reach its full fibre targets ahead of 2025, the awards recognise the innovative work being done by independent network operators to build next-generation networks to meet future broadband demands.

Acknowledging the efforts of companies and individuals across the sector, eight awards were presented, with accolades going to:

“This year the competition was particularly tough, with entries highlighting some of the finest work across the independent broadband sector,” said Malcom Corbett, INCA CEO. “We are extremely proud to be able to recognise this work, which truly showcases the significance of how far the industry has come and the pivotal role independent network operators will play in building the UK’s full fibre and 5G networks – enabling communities even in the outmost rural corners of the UK to reap the social and economic benefits of ultrafast connectivity.”

Andrew Ferguson, of Thinkbroadband and Dana Tobak, of Hyperoptic, also took home Outstanding Individual Contribution Awards for their exemplary achievements as individuals in the independent broadband sector. Ferguson was acknowledged for his outstanding work in keeping the UK public updated on changes across broadband infrastructure and Tobak recognised for her efforts in spearheading the charge to ‘Gigabit Britain’.

“We would also like to acknowledge Andrew Ferguson, of Thinkbroadband and Dana Tobak, of Hyperoptic, for their tremendous contribution in advancing the sector over the past years. Both are a credit to the industry,” added Corbett.

The award winners were selected by an independent judging panel, made up of Annelise Berendt, Point Topic; James Saunby, Vice Chairman at INCA; Rob Leenderts, Director at NGIS Ltd and Chair of INCA; and Sara Waddington of SCTE.

The INCA Golds Awards are sponsored by Comtec.

The INCA Awards exist to celebrate the UK’s most innovative and inspirational independent network people and organisations in the UK.

Eight awards in all were presented in 2018, selected from over 80 nominations.

This year the "INCA Golds" follow on from our recent introduction of the Gold Standard Quality Mark, which itself highlights best practices in performance, design and operations, enabling consumers to buy with confidence when choosing internet services.

A project/deployment using technical innovation to achieve objectives, for example, ability to deliver service to hard-to-reach places. Entries should show how technical ingenuity and innovation have enabled or helped a project, for example, a network deployment, to achieve or exceed commercial or other objectives.Vendors and equipment manufacturers are welcome to enter this category in partnership with a service provider or operator.

A (mostly) urban network deployment or project with greatest social/economic impact. Entries should show how an infrastructure deployment in a city or major town, for example, a new network, has had a significant social or economic impact on the city or town.

A (mostly) rural network deployment or project with greatest social/economic impact. Entries should show how an infrastructure deployment in a rural area or small town, for example, a new network, has had a significant social or economic impact on the area.

A community project or organisation displaying maximum innovation/impact/collaboration/effectiveness. An entry can be a community-owned, social enterprise or other third-sector agency or a community, voluntary or third sector-led project. Entrants should show how they have achieved exceptional results or progress through efficacy, professionalism, innovation or collaboration, or a combination of these.

A public sector organisation that demonstrates an exemplary approach to supporting the deployment of new digital infrastructure (fibre and/or wireless), for example, real progress on barrier busting – street works, wayleaves etc. – or other activities, for example, voucher aggregation or innovative funding approaches.

Outstanding Contribution by an Organisation

An organisation who has done the most to advance independent networks in the last year.

Outstanding Contribution by an Individual

An individual who has done the most to advance independent networks in the last year.

All nominations received by the final deadline on September 13 2019 will assessed by our expert panel of Judges. The shortlist will be announced here in late September.