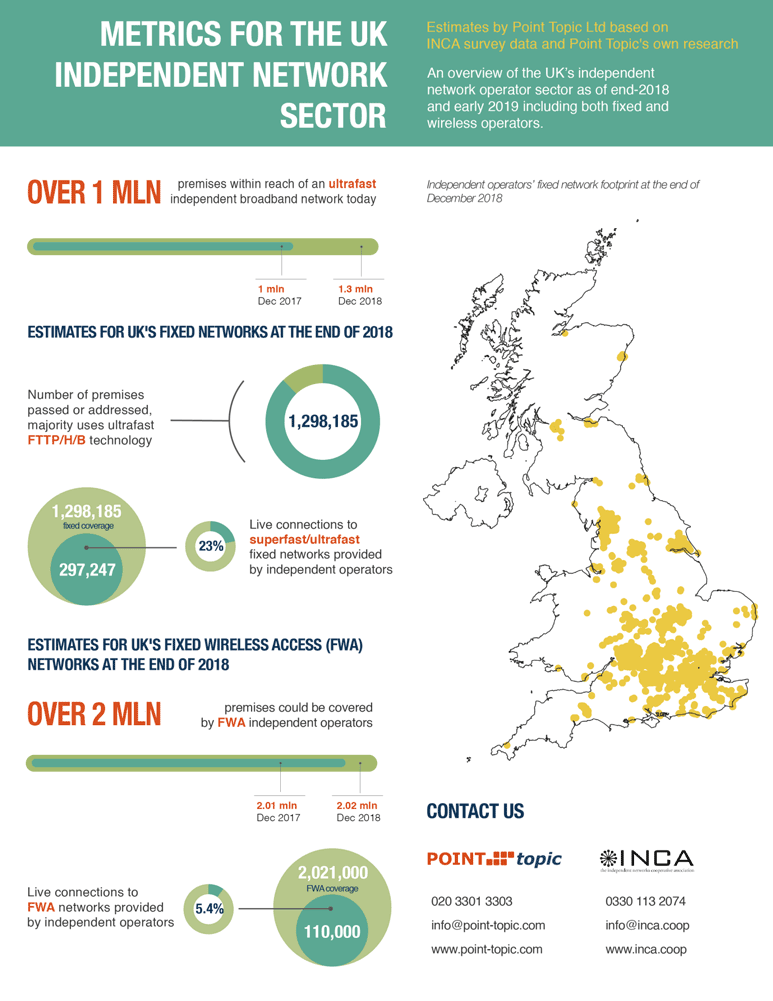 As the industry works to meet Government targets for 2025 and 2033, the report states that independent network operators are aiming to reach 3.38 million premises with full fibre at the end of 2020 and 15.96 million premises by 2025. INCA CEO Malcolm Corbett said achieving this would depend on a number of important factors, some of which were also highlighted in the report.

“These latest figures are very promising,” said Corbett. “The scale of investment in the UK’s independent network sector over the past year has reached an impressive level, with £3.36bn of private funding being committed. This has contributed to the flourishing independent sector in the UK and the great work that is being done to connect homes, schools and businesses across the country.

“It is crucial, however, that we stay mindful of the challenges identified in the report. For the government’s ambitious targets to be met, our main concerns remain – planning and street work costs, delivery times from Openreach, access to ducts and poles, and overbuild. Access to a pool of labour with suitable skills in a post-Brexit era is an additional concern which needs to be addressed.”

In its assessment of 2018, the report gathered evidence suggesting that the UK’s independent network operators passed or addressed more than 1.29 million homes with fixed superfast or ultrafast broadband, with the majority of these using ultrafast Fibre-to-the-Premises or home (FTTP/H) and Fibre-to-the-Building (FTTB) technology.

“It is super to see the independent network operator sector so vibrant and ambitious,” said Annelise Berendt, Principal Associate at Point Topic. “Independent operators have a significant role to play in promoting a healthy, well-functioning broadband sector as the UK looks to deliver on its ultrafast targets. This report highlights they are stepping up to this role, playing their part both now and for the future.”