The past few years have seen a flowering of businesses building new digital networks in competition with BT. They provide pure fibre networks (Fibre to the Premise (FTTP)), fixed wireless networks (FWA), hybrid networks and satellite broadband services. They operate in urban and rural areas and have a range of business models. However, none own a copper phone network and, with limited exceptions, they do not rely on state aid. Instead they use commercial investment to build brand new networks and establish close relationships with the communities they serve. These companies are INCA’s members – the Altnets.

Extensive FTTP, with complementary wireless networks, is fundamental to the UK’s future success. Building Gigabit Britain presents a comprehensive overview of the benefits of investment in pure fibre networks, as well as comparisons between the performance of FTTP and other technologies, such as G.fast, concluding that wide-scale deployment of FTTP is necessary to deliver Gigabit Britain. 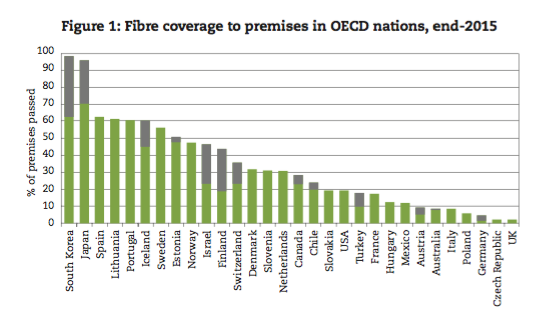 The UK has done well in the deployment of first generation and superfast broadband, but it lags behind all its international competitors in the deployment of FTTP networks. BT continues its strategy of extending the life of the copper network, while the Altnets are already building Gigabit Britain, stepping up to the challenge of investing in and constructing digital infrastructure fit for the 21st century.

Altnets already offer FTTP connections to twice as many premises as BT and by 2020 we forecast they will reach 18% of the UK with FTTP – 1.5m premises more than BT and Virgin Media’s planned FTTP builds combined. Together, the Altnets form the UK’s third digital infrastructure competitor.

In this report we present six recommendations, which, if followed, will help the Altnets to meet and exceed their current deployment plans. Our recommendations do not demand Government subsidies, but Government does have a vital role to play. It needs to set out a clear Gigabit Britain Strategy, including a target for the majority of the UK to have access to an FTTP connection by 2026 – we think that 80% FTTP coverage can be delivered competitively by the market in the next ten years.

If INCA’s recommendations are implemented we believe the Altnets can deliver around half of these FTTP connections by 2026. This sector is ambitious, capable and central to Building Gigabit Britain.

Recommendation 1:
Government should set out a Gigabit Britain Strategy, specifying the UK’s ambition for fixed-line digital infrastructure, which includes:

Recommendation 2:
To encourage greater investment in FTTP networks, Government should:

Recommendation 3:
To remove barriers to FTTP deployment, Government should:

Recommendation 4:
To ensure efficient use of public subsidies and assets, Government must:

Recommendation 5:
To deliver its vision of a “fibre future”, Ofcom must place competition and investment in FTTP networks front and centre of all its work by:

Recommendation 6:
To stimulate the demand needed to drive FTTP investment, the ASA should review its guidelines to ensure that future advertising of both FTTP and copper-fibre hybrid products gives consumers the accurate information required to make informed choices. 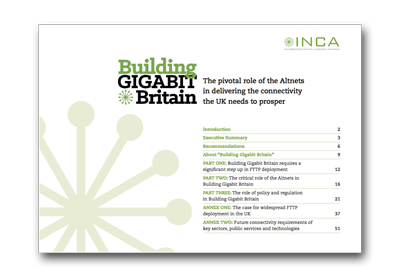 INCA wishes to thank the sponsors of this report. Their generous contributions made this work possible.