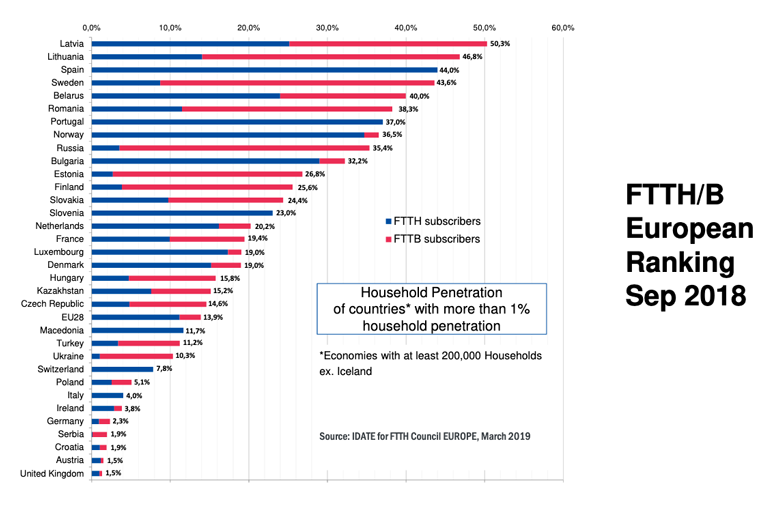 The annual FTTH/B Panorama is a pan-European campaign for the adoption of pure fibre optic-based Fibre-to-the-Home (FTTH/P/B) style ultrafast broadband technologies. Published today, on the final day of FTTH Conference 2019, the report confirms the UK’s entry into the table, ranking it among other European nations, all of which are surpassing household penetration fibre access by more than 1 percent. The report states that FTTH/B subscriptions in the UK have increased by 83 percent when compared to 2017, with a total number of homes passed now reaching 2,817,000.

“We are delighted to see the UK included in the FTTH Council’s annual report, with this confirming that the UK is playing a major role in building Europe’s fibre broadband infrastructure,” said Malcolm Corbett, CEO at INCA. “This recognition has been a long-time coming and it is no coincidence that it comes after such significant progress in the independent sector where smaller operators have grown substantially to become viable competitors to the incumbents. The UK’s ranking is both a credit to their work and the Government’s efforts in recognising that independent network build-outs are critical in developing a world class digital infrastructure in the UK that is fit for future requirements.

In addition to CityFibre, Corbett also acknowledged Hyperoptic, OFNL, KCOM, Gigaclear and Truespeed, alongside Openreach and Virgin Media, as major contributors to the increase in fibre networks throughout the UK.

The expansion of Hyperoptic’s networks was also reflected in the FTTH Council’s 2019 awards, with Dana Tobak, Chief Executive Officer at Hyperoptic, receiving the outstanding contribution award.

The UK’s appearance on this year’s league table follows a Government pledge of £200m towards its full fibre investment and ambitious plans for full fibre targets as set out within the 2018 FTIR.